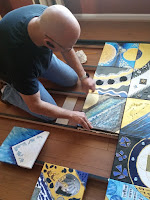 In 2011, we had a question:  What would happen if 25 artists collaborated upon a single piece of art?  The answer became a Guild challenge known as "CanvaSynergy," and you can read all about it and see the result in this post from the "Creativity Rocks!" archives.
Last year, we decided to do it again, since many of our current members weren't with us for the first one.  The rules were the same:  use only the colors provided, the pencil lines on each canvas must show up in the finished work, and anything goes in terms of media (we ARE mixed media artists after all!).

Past President Penny Arrowood penciled in the design (hers was chosen from among those suggested by other members of the Board), canvases and four colors of paint were distributed to each participating member, and the fun began!  Once they were all completed, the task of joining them into one, large piece was given to Stan, Michelle's husband (who'd done the first one, so had experience), and you'll see some of the process in the images at left.

CanvaSynergy II made its grand debut at the 2016 Art of the Carolinas, held at the North Raleigh Hilton hotel in November.  As you'll see from the photos, it the 5'x 5' piece is vibrant, fun, and surprisingly cohesive! Congratulations and thanks to all 25 member artists who contributed their unique style and creativity.

Our plan is to donate CanvaSynergy II to the Visual Art Exchange's "For the Love of Art" gala in February.  We did the same in 2011, and it was bid upon and ultimately won by Nancy McFarlane, the mayor of Raleigh!  We hope this year's piece will do as well, and we are happy to do our part to contribute to the viability of art in Raleigh and beyond.
﻿
Email ThisBlogThis!Share to TwitterShare to FacebookShare to Pinterest
Labels: 2016, CanvaSynergy II, challenge

CMMAG is an enchanting, supportive group of hobbyists and professional artists with knowledge and experience in a wide range of media: print-making, encaustics, fluid pouring, resin work, fiber arts, mosaics, collage, bead work, polymer clay, photography, jewelry-making, book-making, watercolors, acrylics and more. These colliding interests and our depth of experience often result in a cauldron of creativity and learning that is exciting to watch and experience.
Our members gather on the 2nd Thursday of every month at Chavis Community Center in Raleigh. Although this is our official business meeting, we also have demonstrations of new techniques & products, feature member challenges, share our latest artistic endeavors, and mingle with other artists. Visitors are always welcome!
In addition to our monthly meetings, the Guild has frequent members-only workshops and play dates throughout the year.

To join in person: Attend any meeting, and pay your $30 dues by cash, check or credit card.
To join online: Use the PayPal link in the box below (you don't have to have a PayPal account). Note: There is a $2 processing fee to pay via PayPal ($32.)
When we receive your payment, you'll get a thank you email welcoming you to the Guild.